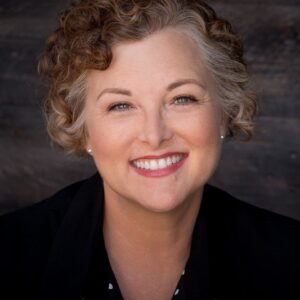 We never know how high we are
Till we are asked to rise
And then if we are true to plan
Our statures touch the skies.
~Emily Dickinson

Ferrell Marshall won the 2016 Stage Raw Award for Featured Actress for her performance in the L.A. premiere of Enron (LADCC Best Production nominee), for which she also received a Scenie Award. She received a SCENIE Award and a Broadway World nomination for a Leading Actress performance in a 2012 production of The Beauty Queen of Leenane. The following year, she received Broadway World nomination for her performance in the L.A. premiere of The End of It. She has been performing on Los Angeles stages for over three decades. Ferrell is also a voice-over artist, has appeared in several independent films, and is a painter. An online gallery of her nature-themed paintings can be found at ferrellmarshall.com. This production marks the fruition of her decades-long ambition to play this role. Her production company, Honey B Productions, is named after her mother, Honey Blanton “Honey B” Scholz, a true original and who, like Emily, loved breaking the rules. Ferrell is a graduate of the American Academy of Dramatic Arts and the Joe Blasco School of Makeup. She sits on the Board of Directors of L.A. Works, a non-profit organization dedicated to mobilizing volunteers throughout greater Los Angeles. Her performance is dedicated to the memory of her husband, George. Loving you. Missing you.

Inspired by Emily: I am in awe of Emily Dickinson’s passion and relentless need to capture a moment, a picture, a feeling… into words. I admire her bold and brave approach to live the life of her choosing.

Member Actors’ Equity Association, The Union of Actors and Stage Managers in the United States.