Artist Jeanie Tomanek draws upon themes that first developed in her poetry; exploring various feminine archetypes from myths, folk-tales and even her own experiences. The natural world as she experienced it growing up on a farm in the Genesee Valley region of New York also strongly influences her work. Trees, flowers, birds and snow are symbols for emotional states or story elements. Dogs sometimes accompany the pale bald “everywoman” protagonist on her journeys that often take place beneath a starry moonlit sky. She has been called a mythic artist, telling ancient stories that never grow old.

Tomanek is self-taught, and has always painted for pleasure. It is only in the last fifteen years that she has begun her full-time artist career. She lives in Marietta, Georgia with her husband Dennis and two rescue dogs.

“I love to show the strength and optimistic attributes of women. Even when they are in a quandary or in danger, I always try to show a glimmer of hope and wisdom—that they will solve the riddle and make it through, stronger and with dignity. Being bald and shorn of any particular identity, they become all women.”

She is also a published poet and her paintings have appeared as cover art for many literary journals and poetry collections. Recently her painting “Thoreau’s Pumpkin” was included in the Hudson River Museum’s “Paintbox Leaves, Autumnal Inspiration from Cole to Wyeth”. Three images were also included in “Re-enchantment” a project produced for Australian Broadcasting Company that explores the ongoing effect of fairy tales in our daily lives.

Her work is held in many private and public collections in the United States, Europe and Australia.

Inspired by Emily: My painting entitled “Letter To The World” is inspired by Emily’s quote: “This is my letter to the world, that never wrote to me.” It tells me to create, even if no one ever sees it, is the best life you can possible live. 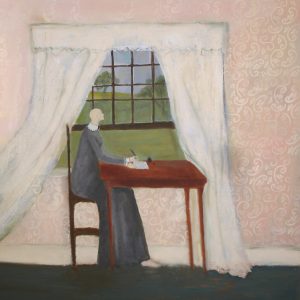